If one visits near the banks of the White River between Jacksonport and Newport Arkansas one may hear locals refer to the area as the "White River Monster Refuge".  Don't mistakenly think that the locals are pulling your leg - the area stretching through Jackson and Independence counties was designated as such by the State Legislature in 1973 in a bill sponsored by State Senator Robert Harvey.  Why go through all the trouble to pass laws making it illegal to harm a monster? 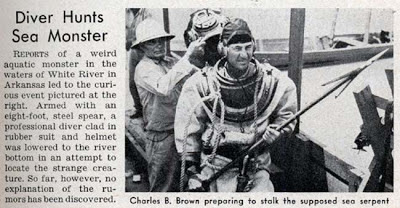 The reason is that some have come to the area to do just that, and the citizens around Jacksonport and Newport care very much for their beloved "Whitey", even though it's been nearly 40 years since the last rash of sightings.  Come to think of it, the creature seems to make its appearances every 30 or 40 years, so now may be the best time to make a trip to northeast Arkansas.

For more information on the White River Monster, see:
https://en.wikipedia.org/wiki/White_River_Monster
Posted by Springfield Cryptids at 4:15 AM No comments:

The Beasts of Summer

It's July - the time of year when so many of the human denizens of Southwest Missouri make their way to the lakes that run back and forth across the Missouri/Arkansas border.  Many of those who enjoy time on the water don't even realize that these lakes are all part of the same system - the 722 mile White River.  For the next few months we will be taking a closer look at the system, beginning downstream at the State designated "White River Monster Refuge" near Newport Arkansas, then traveling upstream to feature the creatures of Bull Shoals, Taneycomo, and Table Rock Lakes, and finally ending with the source of the river at Beaver Lake, the location of documented sightings of prehistoric creatures.

NEXT WEEK:  The July 1st 1915 discovery of the White River Monster
Posted by Springfield Cryptids at 3:09 AM 2 comments: