Almost a month has passed, and I'm sure everyone has been wondering where I've been... right?   No?  Well, anyway...

I've been out of town on a mission searching for evidence of Cryptid activity in other cities that share qualities with Springfield Missouri.  The most promising were the communities of Harrison and Jasper Arkansas.

Though much smaller than Springfield, Harrison has an uncommonly high Tree to Parking Lot Ratio and is only a short distance north of the Buffalo River Valley, a place where hikers and canoeists have sighted many strange creatures over the years.  When I asked the citizens of Harrison for leads on Cryptid activity, they recommended that I travel south to Jasper, a mecca for strangeness in the Arkansas Ozarks. 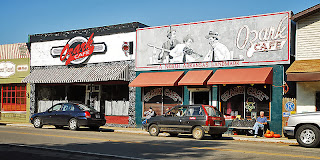 Jasper is a town of about 500 deep in the forests near the Buffalo River.   The townspeople were remarkably friendly and I had a delicious breakfast at the Ozark Cafe, a restaurant that has been open for 104 years!.  When I inquired whether anyone had spotted strange creatures in the area they recommended that I speak to the local historians at Emma's Museum of Junk.  From there I was directed to discuss the matter with the cosmically enlightened folks at The Freckled Frog (also known as The Funky Frog), a lovely little store that smelled strangely of Patchouli oil.  Here, I was wisely instructed to travel deep into the forest to the otherworldly stone pillars and grottos of Pedestal Rocks.

Next week:  The Secret of Pedestal Rocks!
Posted by Springfield Cryptids at 12:27 PM