Those of you who are acquainted with the weird are probably aware, in one way or another, of the Supernatural Registration Authority.  This was an attempt by the Canadians to offer national and international legal status to supernatural creatures and entities from around the world.  This also included naturally occurring non-human individuals such as intelligent cryptids.  According to those involved, a substantial database of these creatures was compiled before budget cuts forced the shutdown of the department and its efforts last year. 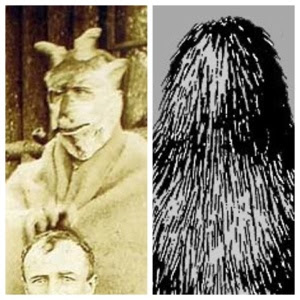 Recently, I have been attempting to gain access to this mothballed database in hopes of finding information on some of the cryptids we have investigated.  For example, is there any information linking the Goatman of the Bethesda Lodge (pictured on left) with the later Goatmen of Maryland and Texas?  Is there any relationship between the Elusive Urban Skunk Ape of Springfield and MOMO, the shaggy cryptid (right) who frightened many in eastern Missouri in the '70s?  Hopefully, I'll be able to persuade the Canadian authorities to release some amount of pertinent data.  Stay tuned...
Posted by Springfield Cryptids at 8:00 AM