The Mystery of the Lost Week 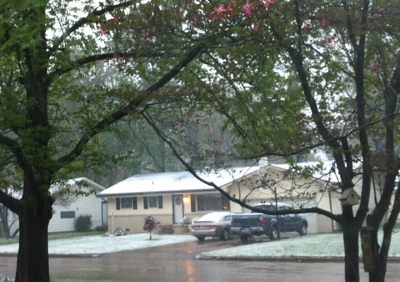 While going over website statistics this weekend I came upon a shocking observation:  Somehow, an entire week has disappeared from my timeline.  No, not just on the website, but from my personal time experience!  For the first time since the beginning of this blog I have missed a weekly entry.  What could have possibly caused such an interruption in the flow of time?

Apparently, some very odd things have happened while I was missing from the time flow.  According to my fellow Cryptid Rangers, Springfield experienced a strange warm weather snowstorm during that week, as seen in this photograph.  As we all know, cryptozoological entities tend to be more active during unseasonal weather.  I should have been out doing double duty during the storm, and yet something (or someone) has erased all of my memory of the event.  It is also strange that the snow then disappeared immediately before Springfield's ArtsFest (according to Ranger E who was witness to the event).

This has led me to a disturbing theory:  Perhaps I WAS present during that week, and at some time during or after the storm I discovered something so important, so salient, and so amazing that something HAD to erase my memory to keep me from reporting the Truth!

In spite of the trepidation this has caused me, you can be sure that I will continue my endeavours and will continue to bring you information on the world of Urban Cryptids.

Posted by Springfield Cryptids at 10:00 PM