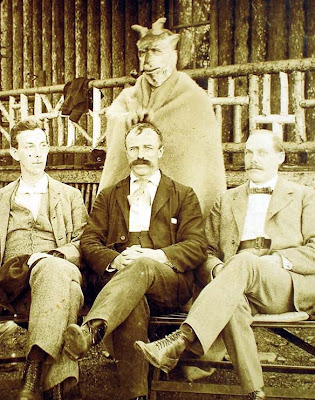 Since revealing the story of the lost town of Bethesda Missouri and the secretive lodge of the Fraternal Order of the Seekers we have received a number of possible leads to more information, but none so strange as this antique photograph sent to us by an anonymous source.

The photo shows no evidence of trickery or manipulation.  In the photo, which appears to date from approximately 1910, we see three men sitting in front of a rustic lodge, perhaps the famous Seekers lodge in Bethesda.  Standing behind them in a stance of obvious camaraderie is an inhuman creature smoking a pipe!

The creature appears to resemble the legendary Goat Man of Maryland, or the Goat Man of Pope Lick Kentucky, or the Goat Man of Lake Worth Texas, though the photo predates any of these more modern legends by at least 50 years.  Fortunately, the creature (who probably normally went naked as most cryptids) has covered himself with a blanket for the sake of propriety.

The photograph begs far more questions than it answers.  Is this truly the only known photograph of the lodge at Bethesda Missouri, or is it from another, similar lodge in some other place?  What was the relationship between these men, the Goat Man, and other cryptids?  Were there, or are there today, people who have secretly befriended such legendary creatures?  We ask anyone with any pertinent information to please contact us!

Posted by Springfield Cryptids at 10:51 AM