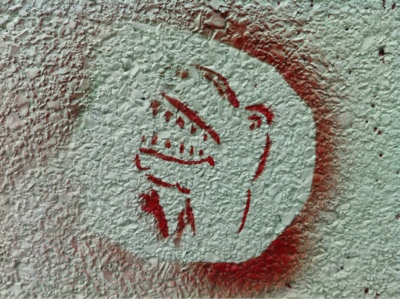 This weekend was the official birthday party of Springfield Missouri, which begs the question - exactly how old is Springfield?

We thought that the city was officially 175 years old, until we found this mysterious pictogram near Millie's on Jefferson Avenue. Do we need to adjust the date by 65 million years?

Posted by Springfield Cryptids at 6:19 PM No comments:

More on the Springfield Yarn Invaders

A few weeks ago we covered the seasonal turning of the Tumbler on Park Central Square.  As we mentioned before, this action is believed to be an important part of bringing the Square and Springfield Missouri back into alignment with the Cosmos.  Yet, an even stranger event occurred earlier this February.  A remarkable construction of yarn appeared on the sculpture, baffling many in the community.  But now - the truth can be told!  A video has been posted on YouTube by the mysterious group responsible for this act of random beauty:
http://www.youtube.com/watch?feature=player_embedded&v=CoObTlY9qrU

Posted by Springfield Cryptids at 12:00 AM No comments:

Spiders and Snakes on Booneville? 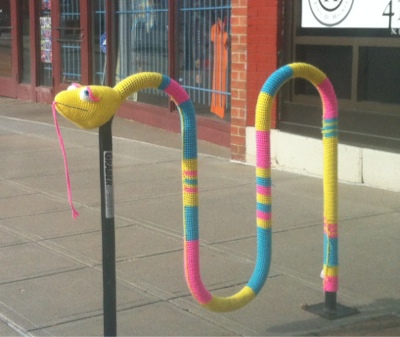 Readers may remember the immense spiderwebs that appeared near Booneville Avenue last New Years Eve. Thankfully, they were not traps created by giant spiders but were instead part of a new art installation at the IdeaXFactory.

But now, even more creepy crawly creatures are appearing on the street, thanks to the efforts of Springfield's "yarn-bombers". Who are these mysterious individuals? We'll have more on them next week.

Posted by Springfield Cryptids at 5:28 AM No comments:

Aliens on the move? 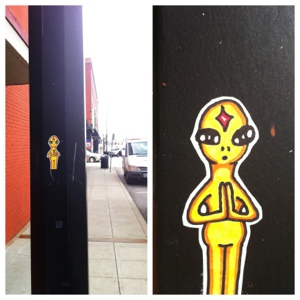 You may remember our post from over a year ago detailing the appearance of alien pictographs behind the Landers Theater. It appears that this phenomena is spreading down Walnut street, as indicated by the presence of this image of a contemplative alien on a lightpost near Swagbot.  Are our little friends from outer space trying to tell us something?  I think that the message may be "Chill Out".

Posted by Springfield Cryptids at 11:34 PM No comments: