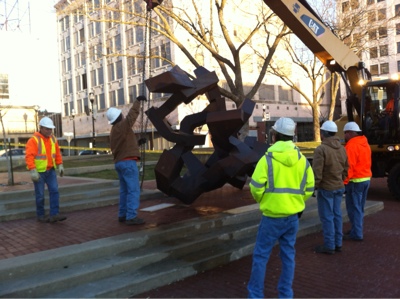 If you were at Park Central Square at 7:30 AM last Tuesday, the morning before the Spring Equinox, you would have seen an uncommon sight:  A small crew from Springfield Public Works using heavy machinery to lift a huge steel sculpture, roll it over, then set it back onto the ground.  Why was this happening, and what was its significance?

It all started in 1971 when the City of Springfield Missouri received a gift of $15,000 for a new sculpture, the first modern sculpture to be displayed by the city, designed and built by an aspiring artist named Aris Demetrios.  Though some in the community didn't think highly of modern art, the sculpture was soon accepted by the public in its new home at Park Central Square.

Then, 41 years later, the Public Works Department realized that they did not know the name of the sculpture or what it was intended to represent.  That's when Public Works Director Jonathan Gano sought out the artist for the answers.  Fortunately, Mr. Demetrios has done very well for himself since 1971 and was more than happy to give the answers.

It turns out that the name of the sculpture is "The Tumbler", and it had a purpose that no one had guessed.  It has a clever polygonal structure that is not obvious at first sight, and has no official top, bottom, or sides.  It was intended to be turned over, or "tumbled" once a season so that it would be a sculpture that changed and moved over time.

And so, last year, the city began to tumble the Tumbler at the beginning of each season, at each Equinox and Solstice.  This, strangely, appears to have had some kind of Feng Shui like effect on Park Central Square, experienced by the scores of peaceful, happy people who visit the Square, especially on weekends.  So, next time you get a chance, you may want to thank the staff of Springfield Public Works for understanding the importance of an artist's remarkable vision (and for helping to keep our good city in alignment with the Cosmos!)

For more info and to see a neat video interview with the artist go to:
http://cityview.springfieldmo.gov/media/the-tumbler-on-park-central-square


Posted by Springfield Cryptids at 5:18 AM