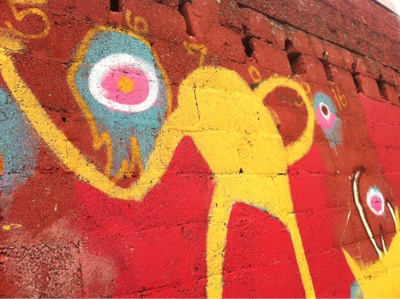 This example of contemporary primitive artwork was found by Ranger E.C. late last year in a secluded area near the intersection of Jefferson and Walnut streets in Springfield, Missouri. Upon viewing this photograph I was immediately struck by the appearance of the floating blue/white/pink objects and their uncanny resemblance to the more complex species of Ephemerozoa described by T. Atherton Bramwell over a century ago. If you have never heard of Bramwell and his speculations on the nature of the Ephemerozoa don't be surprised - only now are his theories being reexamined by serious researchers in regards to more recent photographic and video evidence of what are now called "rods" and "orbs". In the weeks to come we will take a closer look at the concept of Ephemerozoa and the work of T. Atherton Bramwell.

Posted by Springfield Cryptids at 10:11 AM No comments:

A Mean Monster in Michigan

While we continue to set up our new Midtown laboratory and prepare for new experiments (such as our human/ferret telepathy studies), we'll stop to take a look at another rare item in the collection of the UCC.

When studying specific cryptid cases it's always best to go back to the original reports and documentation. To the right is another valuable document from the Urban Cryptid Conservancy collection: The rare, original August 18th, 1965 wire photo distributed by the Associated Press regarding the terrifying encounter reported by the Van Acker family of Monroe, Michigan. The original accompanying wire service message read as follows:


"Christine Van Acker, 17, sports a black left eye after an encounter with what was described as a huge hairy monster who jumped on the side of her car and beat her head against the door until she fainted. State police said that 16 persons have reported sighting the monster in the last two months. One witness drew the drawing at left. Hundreds of rain soaked hunters tramped the woods and fields Monday near Monroe, Mich., in search of the 'beast'."

Coincidentally, this was not long after persons in Springfield, Missouri began reporting that the Elusive Urban Skunk Ape was leaving flowers on doorsteps.  Obviously, some cryptids are nicer than others.

Posted by Springfield Cryptids at 12:38 AM No comments:

As we prepare to move the collection of the Urban Cryptid Conservancy to our new secret laboratory in Midtown Springfield Missouri we'll take a look at a nearly forgotten item in the collection.

Perhaps you'll remember this advertisement that ran in comic books decades ago. What happened to the creatures that were sold to children through advertisements like these has been a troubling question. Sea-Monkeys have never become an invasive species, while "Chameleons", otherwise known as Anoles, can be found throughout California. A far more dangerous example would be the Baby Alligators that grew up to infest so many of the city sewers in the United States. And let us not forget the mail-order Cobras that led to the infamous Springfield Cobra Scare of 1953. Fortunately or unfortunately, no feral population of these strange "botanical" creatures has been reported. In fact, we know very little about these particular mail-order monsters. If you have any information regarding this advertisement and the creatures described therein please contact me!

Posted by Springfield Cryptids at 10:02 AM No comments:

The Monster Catfish of 1907 - the final chapter

- Before reading this week's post make sure you have read the first and second post regarding the entirely true story of Springfield Missouri's Monster Catfish of 1907! -

Following ex-mayor Ben Meyer's announcement of a $100 reward for the capture of the Monster Catfish of Doling Park Lake a number of local fishermen took up the challenge.  According to the August 29th 1907 edition of the Springfield Leader, "Many and varied have been the contrivances and schemes tried in an effort to capture the monster fish with the mouth which would make a hippopotamus blush with modesty", but of all these only one appeared close to bringing him in.

After the failure of both trot lines and traps, a few Springfieldians devised a more ambitious plan.  They commissioned a local blacksmith to make a giant hook out of a foot of 1/2 inch steel bar, tied it to 75 feet of 1/2 inch rope and baited the hook with five pounds of liver.  On the night of August 28th they threw the baited line into the lake, securing it to one of the willow trees on the south side of the lake, and camped for the night.  At about 2:30 am:


"... they were awakened by the tearing and crashing of the willow tree and the creaking rope as it was drawn taut.  Rushing to the end of the tree they grasped hold of the rope, but they were too late.  The tree, almost bent to the ground, suddenly sprang back.  The large steel hook, having proved too weak for the mighty strength of the finny monster, was straightened out as though it had been hammered on the blacksmith's anvil."

As plans were already underway for an all city free fish fry on Labor Day, September 2nd, a decision was made to seine the lake to catch as many fish as possible for the citizens of Springfield, and Ben Meyer realized that this might be the best opportunity to get near the Monster Catfish.  The lake's dam was opened to reduce the lake to about shoulder depth and a small army of 50 men were employed to drag a seine net down the entire length of the lake.

The results of this last confrontation with the beast were recorded in the September 1st 1907 edition of the Springfield Leader:


"Ben Meyer, the jolly ex-mayor of Springfield, Lee Savage and Frank Rosback, hearing that the monster catfish had at last been drawn within the meshes of the great drag net, and desiring to be of assistance in landing the monster, procured a canoe, and paddled out to where the seine was being dragged.  Myers immediately grabbed hold to the top of the net. About this time the monster catfish spied him, and recognizing the ex-mayor as his sworn enemy, gave a big flop, cleared the top of the net which was over two feet out of the water and landed broadside against the canoe, upsetting it and the party in the cold and chilly lake."

Meyer went head first into the lake, with only his feet visible at the surface.  Seeing his foot:


"... the awful monster grabbed it and shook his victim, just as a rat terrier hangs on to a rat. His friends immediately went to his rescue and helped him to regain his feet. About this time the fish returned to the attack and all three men went down before his fierce onslaught. The seiners, about fifty in number, rushed and splashed to the rescue with the big drag net.  At this onslaught the monster disappeared and was seen no more during the afternoon."

Even though Meyer increased his reward for its capture the Catfish was never caught.  One local proposed that the lake be drained entirely and the Catfish be dug out of the mud with a steam shovel, but this was never done.

So, were there ever any more sightings of the Monster Catfish?  Is there any connection between it and the Giant Catfish currently living in Lake Springfield?  And do the underground rivers from whence the monster came hold any more secrets?  You can be sure that we will continue to search for the answers!

Posted by Springfield Cryptids at 10:47 AM No comments: