More on the Monster Catfish!

By diligently searching through historical documents we have been able to uncover much more information regarding the entirely true story of the Monster Catfish of Doling Park Lake, one of Springfield Missouri's earliest known Urban Cryptids.  With so much new information becoming available, we will examine the newspaper reports leading up to the infamous battle of August 31st, 1907.

According to the August 18th, 1907 edition of the Springfield Leader, the authorities in Springfield first became aware of the monstrous fish when Duff, beloved dog and mascot of the Springfield Police Department had his tail bitten off while swimming in the lake.  By August 21st, the newspaper had uncovered the truth:  Some time before, two workers at the park had seen the creature appear from the underground lake at nearby Giboney Cave.  Recent torrential rains had swelled the stream leading out of the cave, allowing it to escape.  According to these witnesses:


"The mouth resembled more the picture of the mouth of the hippopotamus on a circus billboard, and his teeth were fully six inches long.  Large horns over a foot long graced the head of the huge monster, while the fish was literally covered with long wiry whiskers, which gave the fish the appearance of a huge sea monster rather than that of a fresh water fish."

Geologists speculated that the creature had originally come from the Mississippi River and somehow entered a vast underground waterway through the White River system.

While a few workers at Doling Park kept the creature a secret, the monstrous fish made itself at home in the lake, befriending the local swans.  When some of the swans were eaten by two small alligators (kept in a nearby menagerie pond) the Catfish burrowed into the pond and devoured the alligators in revenge.

In the August 25rd edition, the Springfield Leader reported that former mayor Ben Meyer had an earlier encounter with the beast.  Meyer had been fishing in the lake, and while reeling in a prize bass the Monster Catfish came up and devoured Meyer's trophy.  Few believed his story, fueling his animosity toward the Catfish and prompting the former mayor to announce a $100 reward for the capture of the monster.

NEXT WEEKEND - More encounters with the monster, including the final battle!

The True Story of the Doling Park Catfish: Prelude

Next week we will be taking a closer look at the facts regarding Springfield Missouri's infamous Doling Lake Monster Catfish attack of 1907, but first we will give a little background to the incident.

The area surrounding Doling Lake first comes into the historical record when it was acquired in a homesteading grant by Alexander Giboney in 1852. Later, his son sold the land in 1882 to a successful businessman named James Marshall Doling, owner of the Doling Dry Goods store on Commercial Street. It was Doling that dammed the twisting stream flowing from Giboney Cave, forming the lake that bears his name. By the turn of the century, Doling had developed the land surrounding the cave and the lake into a popular amusement park. A common rumor of the time held that passages of Giboney cave led to caverns beneath the city square (a rumor that we will explore in a later article). Three Springfield entrepreneurs - W.H. Jezzard, Charles E. Brooks and former Springfield mayor Ben Meyer - formed the "Springfield Amusement Company" and purchased the park from Doling for $50,000.

Today, the lake is only a pond, but at that time it was many times larger and well stocked with catfish. Ben Meyer was aware of one particular fish in the lake, a gigantic catfish that had been sighted but had never been successfully caught. Like Captain Ahab in the book Moby Dick, "Benny" Meyer was determined to catch this fish, an obsession that led to his great battle with the beast in the Autumn of 1907.

NEXT WEEK:  We examine the original September 1, 1907 Springfield Leader account of Meyer's Battle with the Catfish!

Posted by Springfield Cryptids at 10:02 AM No comments: 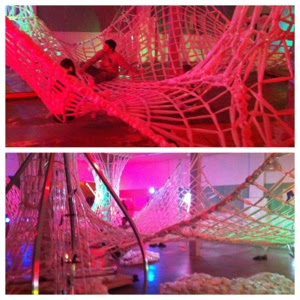 One would normally expect to find at least a few remarkable happenings at Springfield Missouri's First Night celebration, but this New Year's Eve we got quite a shock as we were walking down Booneville Avenue, mere yards from where Jordan Creek runs beneath the street.  Here, we beheld an alarming sight:  Innocent citizens appeared to be entrapped inside a gigantic spider web!  Fearing the worst, we rushed inside to see if anyone could be rescued.
Fortunately, it was not a spider web at all!  We had stumbled into the ideaXfactory, and the colossal web had been designed and knitted out of plastic sheeting by members of Art of Space.  This is all part of the IDEA Commons (Innovation Design Entrepreneurship Art) a collaborative initiative of the City of Springfield and Missouri State University to create a 88 acre center city urban research park.  We expect to see big things come out of these projects, and it will be interesting to see how they will effect center city cryptid activity.
Posted by Springfield Cryptids at 1:07 AM 1 comment: 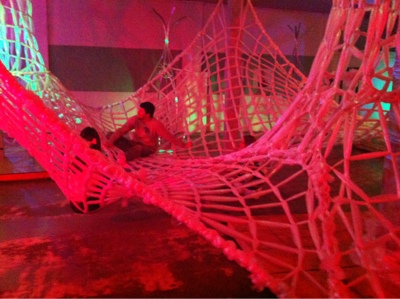 Last week we looked back at some of last year's remarkable discoveries and achievements. Now let's look ahead at some our plans for 2013:
So stay tuned - More Urban Cryptids are on the way!
Posted by Springfield Cryptids at 4:25 AM No comments: