The Lost Town of Bethesda and More on Springfield's Cryptid History 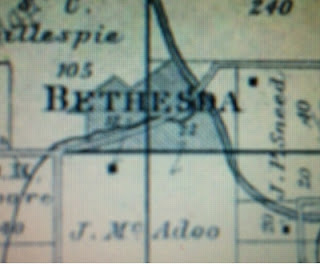 As we continue to examine the historical evidence of Cryptids and Cryptid Hunters in the area around Springfield Missouri we find further hints regarding the Fraternal Order of the Seekers of the Skunk Ape.  According to legend, members would, at unexpected times, leave their homes in the dark of night to "join the hunt, for the game's afoot!" and, at times, not return for days.  Before the turn of the century, it was rumored that the organization maintained a collection of oddities of Natural History in its secretive Fraternal Lodge near the mineral spring at the town of Bethesda, just northwest of Springfield.  Eager to find what became of this collection, we found the location of Bethesda on a turn-of-the-century map and proceeded to the site. 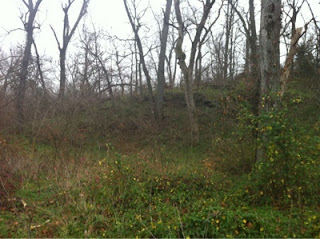 Imagine our amazement when we discovered that the entire town had vanished!  No, I do not mean "vanished" in the manner of a ghost town where a few ramshackle buildings remain - I mean truly vanished.  As we searched the area we found that NOTHING remains, as nature has completely  reclaimed the grounds where once was a town.  Indeed, the town of Bethesda disappears from later area maps, as if the powers-that-be decided to erase all mention or trace of it.  We cannot help but wonder what could have caused an entire town to be removed from history, or what happened to the Fraternal Lodge of the Seekers and its strange collection.

It is not until the 1950's that any more mention appears of the Skunk Ape or any other cryptid in the Springfield Missouri area.  The puzzling case of the Springfield Cobra Scare of 1953 appears to have brought strange creatures back to the city's collective consciousness  and the nation's preoccupation with monsters, both earthly and otherwise, in the later 50's and 60's appears to have reminded some Springfieldians of their own cryptid legends just as the city came into the national spotlight through the Ozark Jubilee television and radio program originating out of Springfield's KYTV and KWTO radio.  Nationally revered folk musician Jimmy Driftwood first learned of Springfield's Elusive Skunk Ape while performing on the program, and although he probably never saw the creature, it was the the inspiration for his song, "The Lonesome Ape".

Today, the citizens of Springfield are becoming increasingly aware of the presence of strange creatures in their midst.  Though little concrete evidence remains to prove that the Fraternal Order of the Seekers of the Skunk Ape ever existed, we of the Urban Cryptid Conservancy see them as pioneers in our field and the progenitors of our efforts.

Posted by Springfield Cryptids at 6:44 PM