If you have not already read the previous entries regarding the tiny unidentified cryptids and the previous rational explanation thereof then do so before continuing.  From here on things get a lot more strange. 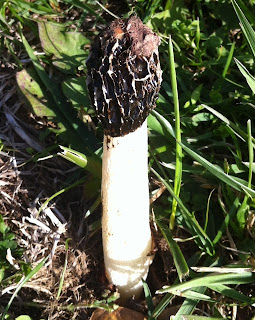 In the years since I saw the tiny running creatures I had settled on the kitten hypothesis mentioned earlier, but that all changed a month ago when I spotted this rather tall mushroom, one of a number of species commonly called False Morels, growing in a neighborhood lawn.  I instantly recognized the cylindrical shape and color of the stalk as being identical to that of the creatures, leading me to my new theory:  The Animate Fungus theory!

As you'll probably remember from Biology Class, a mushroom is only a small part of the fungal organism - the "fruiting body" of the underground mycelium which grows under the soil as a network of hyphae, often over a rather large area.  The purpose of the mushroom is to spread spores to new areas. Unfortunately, the urban environment can limit the growth of mushrooms. Any portion of the mycelium growing under concrete or asphalt is unable to sprout a fruiting body above itself, and wide areas of man made surfaces keep spores from ever finding fertile ground.

On the other hand, some distant relatives of mushroom sprouting fungi have motile phases. Members of the Chytrid phylum create spores with flagella that can swim through water. Land dwelling Slime Molds (which are not true fungi) go through an amoeboid motile phase that allows large patches of the organism to slowly crawl across a surface as a single unit - a thought that once terrified me as a boy!  Even the cell structure of fungi resembles simple animals more than plants, with cell walls made not of cellulose like plants, but of chitin as found in the exoskeletons of arthropods.

So, when I first saw the aforementioned False Morel, I suddenly realized that a mushroom having the ability to separate itself from the mycelium and sprint short distances across roads or parking lots would have a definite advantage over other mushroom species in an urban environment. The tiny white creatures I had seen were the stalks and legs of two sprinting mushrooms, their black caps invisible in the darkness.

Since then we have been able to collect and dissect a number of similar mushrooms in hopes of finding one with evidence of limb development, but so far we have been unsuccessful. Perhaps the motile species, otherwise similar to other Morels and False Morels, only develops limbs immediately before sprinting?  Obviously we have a lot more searching ahead of us.
Posted by Springfield Cryptids at 8:42 AM