Last week I described the two tiny creatures that I saw some years ago in a darkened front yard here in Springfield Missouri.  Over the years I have come to two conclusions as to what kind of creature or creatures I saw that night.  This weekend I will describe what I call the Rational Explanation, while next weekend I will cover my New Explanation. 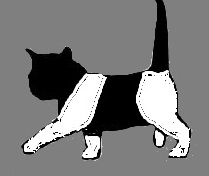 If you'll remember, I caught sight of two little, white, headless and armless creatures running through the grass in a darkened lawn just south of the Brentwood Library.   Every cryptozoologist should always be aware of the possibility that the strange creature being observed may just be a common animal that looks strange because of the peculiar circumstances of the situation.  Thus I came to the conclusion that the two little cryptids were actually one animal.  As you can see in the illustration, a kitten with a black head, torso, and tail and white haunches and legs could appear to be two smaller running animals.  Mystery solved!

Well, maybe not.  Next week I will describe the recent observation that led to my new theory regarding this sighting, for I now propose that the creatures that I saw that night were...

Animate Cryptid Fungi!!!
Posted by Springfield Cryptids at 7:41 AM