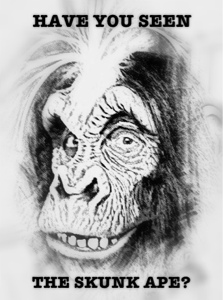 As Autumn brings us cooler days and changing colors it also brings frustration to the cryptozoologist. That's because late October is the season for false sightings. The last weekend of October is particularly aggravating as more and more people don furry suits and go on the prowl through the city. They don't seem to realize that this makes it very difficult to conduct quality scientific observation. This is especially unfortunate because this time of year appears to be the season when the Elusive Urban Skunk Ape roams the city collecting food for the winter. Some eyewitnesses claim that he actually spends the last night of the month going door to door with a small bag collecting morsels, but I find this highly unlikely. If you do happen to see the Elusive Urban Skunk Ape this Halloween make sure and e-mail me at:
springfield.cryptids@gmail.com
Posted by Springfield Cryptids at 9:29 AM