The Zombie Outbreak is Nigh!

As mentioned earlier, I have been recruited by the area's Zombie Outbreak Response Team and have been given an important and expendable position in the group! Though I have not yet actually SEEN a brain eating mutant yet, I have determined that they are a mutated form of human being and are not classified as cryptid animals. I have also been told that zombification is a treatable condition (something not seen in the movies). We are now preparing for the expected zombie outbreak at the Monster Dash at Ritter Springs Park at 1 pm on Oct. 6. Don't miss out on the fun!
http://getfi2.wix.com/monsterdash 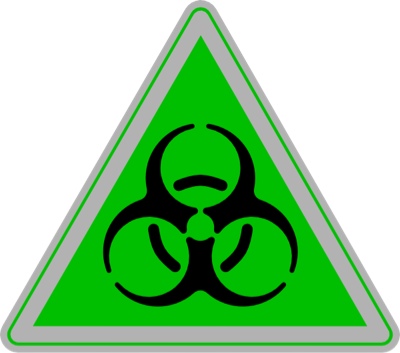 Posted by Springfield Cryptids at 4:05 AM No comments:

We're sorry that the blog was inaccessible for a couple of weeks - an attempt to set up a new domain name (urbancryptids.com) got rather messed up by some googliness at Google, but the site is back on line under its original URL.  Stay tuned for the relaunch of the new domain, and in the meantime check out the article below about the ancient frogs of Cahokia!
Posted by Springfield Cryptids at 10:15 AM No comments: 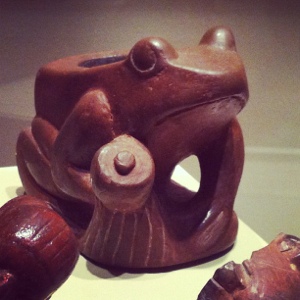 For the final piece of the puzzle to the ancient frog mystery we made our way to the Cahokia Mounds Museum and Historic Site just east of St. Louis near Collinsville Illinois.  The Moundbuilders of Cahokia were part of the Mississippian culture that flourished in what is now the central United States from around 600 to 1400 A.D. They left behind many remarkable artifacts, including the great mound city at Cahokia for which they are named.

This pipe bowl of fire clay depicts a frog-like creature holding a ceremonial rattle in its hand.  This is one of three such ceremonial frogs that have been found related to the Moundbuilder culture.

So, did these frogs have some importance to the dwellers of Cahokia?  Do they represent magical animals, or some kind of intelligent cryptid like the infamous "Loveland Frogs" of Ohio? Do they have any link to the more recent strange frog images that we have previously discovered? Perhaps we will never know!

Posted by Springfield Cryptids at 12:19 PM No comments:

In the Depths of the Museum 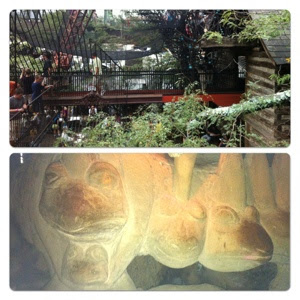 Armed with our special equipment packs we arrived in St. Louis Missouri well prepared to explore the insanely baroque majesty of the City Museum. Created by artist Bob Cassilly and his small army of artisans, the Museum is built largely out of the detritus of the city itself. As we climbed and crawled through the many passageways of the building we found signs of innumerable creatures and caught sight of many living creatures as well. But it was in the darkest depths of its maze-like caverns that I made my most stunning discovery.

While crawling blindly through the cramped and narrow catacombs my hands fell upon strange yet familiar stone shapes. Covering the walls of this passage were the grim stone visages of giant frogs, very much like the giant stone frog statue that we had found south of Lake Springfield!

Was this just a coincidence, or was this evidence of some kind of ancient cryptid amphibian activity? The very next day we made another discovery outside of St. Louis that proved how truly ancient it was!
CONTINUED NEXT WEEK
Posted by Springfield Cryptids at 9:50 PM No comments: 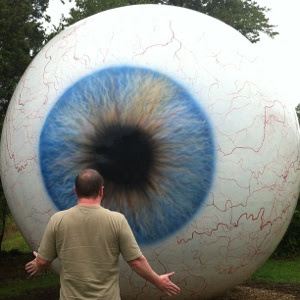 While traveling to St. Louis to investigate reports of cryptids in and around the City Museum we discovered this strange alien creature in a park southwest of the city. Though it appeared frightening we discovered that it was peaceful and entirely harmless. Unfortunately, we were unable to communicate with the alien.
Posted by Springfield Cryptids at 10:11 AM No comments: