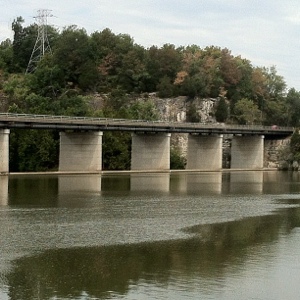 When I was a young boy I first heard the tale of the giant catfish that lived on the upstream side of Kissick Dam at James River Power Station at Lake Springfield. According to the story, a diver performing an inspection had seen a catfish the size of a Volkswagen Beetle lurking at the base of the dam. Later, as an adult, I heard many other stories of giant catfish at other dams around the nation. Those tales told of Buick sized catfish and truck sized catfish. In fact, it seems that every dam in the country had its own giant catfish legend. So why is our giant catfish smaller than everyone else's giant catfish? The fact is, the dam at James River Power Station is actually rather small. Unlike larger dams that are used to generate hydroelectric power, our dam simply collects water to be used to generate steam in our coal-fired power plant. It makes sense that a smaller dam would be home to a smaller giant catfish. Still, it must be a very cozy home for our monster fish. Water heated by the power plant is reissued into the lake close to the dam, making it nice and toasty warm during the winter.

Please note the warning in the second picture. Do not release any non-native creatures into Lake Springfield. We would not want them to grow to Volkswagen size, would we?
Posted by Springfield Cryptids at 3:20 AM