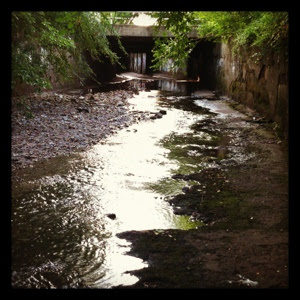 Most citizens of Springfield Missouri have visited Water Street, but few are aware of the reason for Water Street's name - an underground river flowing beneath their feet!

Originally, Jordan Creek ran along the bottom of Booneville Hill, fed by a natural spring located near present day Founders Park.  Nearby homes and businesses would sometimes be flooded by Jordan Creek during wet weather.  To remedy this, the spring and creek were redirected into an east to west culvert and buried under arches and asphalt, creating an underground river running well over half of a mile under the center of the city.  Even during our current drought conditions the spring and creek continue their steady flow.  It is unclear if this river has any connection to the tunnels known to exist under the square, but we believe that the river tunnel is very likely being used at times by the Elusive Skunk Ape.  In fact, it appears that the Skunk Ape is using much of the city's drainage system to travel unnoticed.

As seen in this photo, the river exits the underground tunnel at the coordinates listed below.  It would be very interesting to see how the flora and fauna of the creek have adapted to underground life, but the underground portions of Jordan Creek are currently off limits.   Some intrepid explorers have documented their investigations, though...
Posted by Springfield Cryptids at 7:00 AM