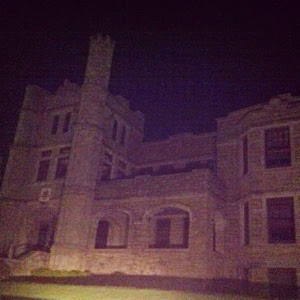 As we have continued to explore potential cryptid movement trails related to waterways through the city, we have noticed that many of these areas are also relatively poorly lit at night, making these pathways even more potentially attractive as corridors for nocturnal animal movement.
One night, while following the north branch of the Jordan Creek drainage system, I spotted a particularly dark area within the residential neighborhood on the nearby plateau, not far from the well lit campus of Evangel University. This darkened area turned out to be the grounds of the National Guard Armory. Following the darkened driveway into the Armory grounds, I came upon the pitch black silhouette of Pythian Castle.

Back in 1913 the Pythian Castle was built by the Knights of Pythias to be an orphanage and retirement home. During the Second World War it was acquired by the military and at one time (supposedly) housed a few German prisoners of war.  According to some, it is haunted to this day.

We have no idea why it wasn't lit this night (perhaps the ghosts like it that way!) but it is often the scene of special events.  For more on the Castle today, see
http://www.pythiancastle.com
Posted by Springfield Cryptids at 8:44 AM