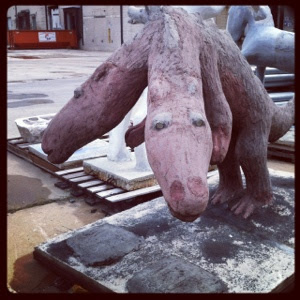 While exploring Founder's Park on Water Street (searching for more evidence of the Urban Skunk Ape) we caught sight of what appeared to be a strange two-headed monster beyond a group of buildings to the north. We circled the buildings onto Booneville Avenue and then followed the railroad tracks to the location of the beast. It proved to be a statue of some kind of two-headed creature secluded behind a chain-link fence.

Making the situation even stranger, we recognized that it was the very same statue that had earlier been seen along the side of Highway 60 between Springfield and Republic, but had disappeared some time before.
How did it arrive at its new location?
- found by S.C.
Posted by Springfield Cryptids at 8:12 AM