More on the Marionville Mutants 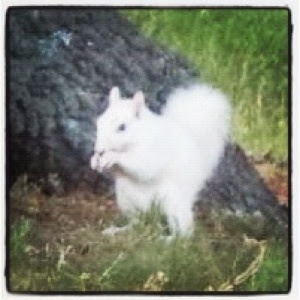 As runners from around the Ozarks prepare for next weekend's Running of the Squirrels 5K race in Marionville Missouri, we decided to take a closer look at that town's favorite mutants - the famous White Squirrels.

Although commonly reported to be albinos, it is possible that these squirrels are actually carrying a gene for leucism, a similar condition causing white fur and dark eyes rather than the pink eyes found in albinism. Thus we set out to document the eye color of the White Squirrels.

Arriving in town at approximately 8 AM we were quickly able to locate seven White Squirrels within a half acre space. Rather than behaving competitively (as squirrels often do) all seven appeared to be feeding peacefully and cooperatively. Although their eyes often appeared dark, it became obvious that most of the squirrels exhibited bright red or pink eyes. Within a few minutes we were able to capture 42 separate images of white squirrels via digital camera.

Later, on inspection, we discovered something very unusual about our photographs. Each photo of a red-eyed subject was strangely blurred as if something was interfering with the operation of the camera. Only one photo was successful, the only photo taken when the subject's eyes were not gleaming red. Is it possible that the White Squirrel's glowing eyes had some mysterious effect on our camera? Perhaps these creatures are exhibiting mutations more powerful than previously thought!
Posted by Springfield Cryptids at 8:08 AM

Email ThisBlogThis!Share to TwitterShare to FacebookShare to Pinterest
Labels: Mutants