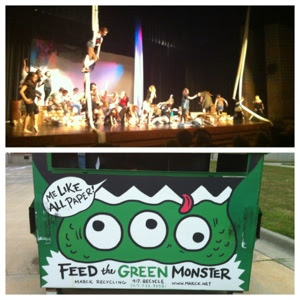 As mentioned in a previous post, the world premiere of Believing in Monsters was staged at Willard High School in Willard Missouri this weekend. By all accounts the show was a rousing success. Strangely enough, though, outside the theater another monster was making an appearance. Willard High School has its own Green Monster feeding bin (like those described at other locations in previous investigations), and it hints that the infamous Green Monster may be undergoing unforeseen changes. Unlike previous sightings of Green Monster images, this monster has developed a third eye! The Green Monster mystery grows stranger and stranger!
- found by S.C.
Posted by Springfield Cryptids at 8:47 AM